Flawless: Inside the Largest Diamond Heist in History 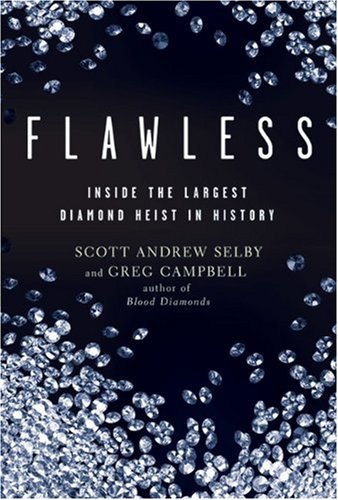 On February 15, 2003, a group of thieves broke into an allegedly airtight vault in the international diamond capital of Antwerp, Belgium and made off with over $108 million dollars worth of diamonds and other valuables. They did so without tripping an alarm or injuring a single guard in the process.

Although the crime was perfect, the getaway was not. The police zeroed in on a band of professional thieves fronted by Leonardo Notarbartolo, a dapper Italian who had rented an office in the Diamond Center and clandestinely cased its vault for over two years. The who of the crime had been answered, but the how remained largely a mystery.

Enter Scott Andrew Selby, a Harvard Law grad and diamond expert, and Greg Campbell, author of Blood Diamonds, who undertook a global goose chase to uncover the true story behind the daring heist. Tracking the threads of the story throughout Europe from Belgium to Italy, in seedy cafes and sleek diamond offices, the authors sorted through an array of conflicting details, divergent opinions and incongruous theories to put together the puzzle of what actually happened that Valentines Day weekend.

Elmore Leonard meets Franz Kafka in the wild, improbably true story of the legendary outlaw of Budapest. Attila Ambrus was a gentleman thief, a sort of Cary Grant–if only Grant came from Transylvania, was a terrible professional hockey goalkeeper, and preferred women in leopard-skin hot pants. During the 1990s, while playing for the biggest hockey team in Budapest, Ambrus took up bank robbery to make ends meet. Arrayed against him was perhaps the most incompetent team of crime investigators the Eastern Bloc had ever seen: a robbery chief who had learned how to be a detective by watching dubbed Columbo episodes; a forensics man who wore top hat and tails on the job; and a driver so inept he was known only by a Hungarian word that translates to Mound of Ass-Head.

BALLAD OF THE WHISKEY ROBBER is the completely bizarre and hysterical story of the crime spree that made a nobody into a somebody, and told a forlorn nation that sometimes the brightest stars come from the blackest holes. Like The Professor and the Madman and The Orchid Thief, Julian Rubinsteins bizarre crime story is so odd and so wicked that it is completely irresistible. Amazon

The Man Who Loved Books Too Much: The True Story of a Thief, a Detective, and a World of Literary Obsession

Unrepentant book thief John Charles Gilkey has stolen a fortune in rare books from around the country. Yet unlike most thieves who steal for profit, Gilkey steals for love-the love of books. Perhaps equally obsessive is Ken Sanders, the self-appointed “bibliodick” who’s driven to catch him. Following this eccentric cat-and-mouse chase with a mixture of suspense, insight and humor, Allison Hoover Bartlett plunges the reader deep into a rich world of fanatical book lust and considers what it is that makes some people stop at nothing to posses the titles they love. Amazon

On New York’s Park Avenue on a rainy Tuesday night in October 1964, the famous Mafia chieftain Joseph Bonanno was kidnapped by two mobsters and reported by the police as dead on the following morning. More than a year later, Bonanno mysteriously reappeared, setting off a bloody mob feud that came to be known as the “Banana War.”

In this monumental work—packed with intimate details and brilliant reporting—bestselling author Gay Talese first brought to the American consciousness a world and a life previously known to only a few. No other book has done more to acquaint readers with the secrets, structure, wars, power plays, family lives, and fascinating, frightening personalities of the Mafia. Amazon 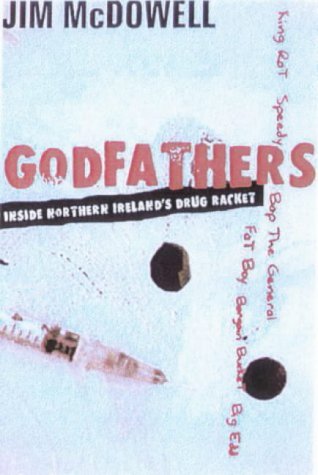 ‘Godfathers’ is the story of the Northern Ireland drugs trade. It names the names and tells the stories of the dealers and their enemies. Dealers like Brendan ‘Speedy’ Fegan and Brendan ‘Bap’ Campbell, two of the brashest, highest-living, most cavalier young gangsters in Belfast. They loved the high life, the flash cars, the wads of money, the champagne lifestyle, the wild women. They both ended up on a pathologist’s slab, gunned down by the paramilitaries.

But ‘Godfathers’ also reveals that the paramilitaries are in the drugs trade too. We meet Ulster’s porn queen who was the live-in lover of a UVF commander of North Belfast: she too graduated to the drugs trade. We meet the hard men who drive the trade. We look at the huge drugs problem in Ian Paisley’s constituency. We look at the links between the UVF, the late Billy Wright and the late Martin Cahill ‘The General’. King Rat and The General were in business together. McDowell reveals how the UDA and UVF are into drugs in a big way. He reveals that the Provisional IRA, despite their campaign against many dealers, have been prepared to bankroll major drugs operations in return for protection money. ‘Godfathers’ gives you the story from the streets. Amazon

On February 2002, New York Times Magazine writer Michael Finkel received a startling piece of news: a young man named Christian Longo, wanted for killing his entire family, had been captured in Mexico, where he’d taken on a new identity: Michael Finkel of the New York Times.

The next day, on page A-3 of the Times, came another troubling item: a note from the editors explaining that Finkel, having falsified parts of an investigative article, had been fired. Nonetheless, the only journalist Longo would speak with was the real Michael Finkel, and so Finkel placed a call to Oregon’s Lincoln County jail, intent on getting the true story. So began a bizarre and intense relationship—a reporting job that morphed into a shrewd game of cat-and-mouse. Part mystery, part memoir, part mea culpa, True Story weaves a spellbinding tale of murder, love, and deceit with a deeply personal inquiry into the slippery nature of truth. Amazon

The Night of the Gun: A reporter investigates the darkest story of his life. His own.

Critical and commercial phenomenon: The Night of the Gun hit bestseller lists thanks to a national tour and rave reviews from every major newspaper in the country. “Imagine James Frey’s A Million Little Pieces on a dose of truth serum, suffuse it with some cynical humor and a good handful of self-depreca- tion, and you get David Carr’s remarkable and immensely readable memoir,” wrote the New York Post. People magazine gave it three stars, saying “The Night of the Gun is an odyssey you’ll find hard to forget.”

Lacerating honesty, scrupulous reporting: Many memoirists of dysfunction, addiction, and recovery have told incredible stories— what distinguishes Carr is his credibility. Entertainment Weekly wrote, “Carr is an undeniably brilliant and dogged journalist, and he’s written an unforgettable memoir.” Amazon 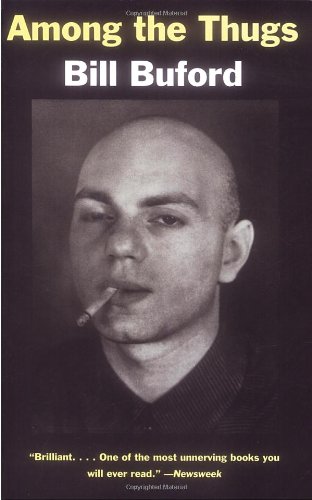 They have names like Barmy Bernie, Daft Donald, and Steamin’ Sammy. They like lager (in huge quantities), the Queen, football clubs (especially Manchester United), and themselves. Their dislike encompasses the rest of the known universe, and England’s soccer thugs express it in ways that range from mere vandalism to riots that terrorize entire cities. Now Bill Buford, editor of the prestigious journal Granta, enters this alternate society and records both its savageries and its sinister allure with the social imagination of a George Orwell and the raw personal engagement of a Hunter Thompson. Amazon

The Man Who Loved Books Too Much: The True Story of a Thief, a Detective, and a World of Literary Obsession

Unrepentant book thief John Charles Gilkey has stolen a fortune in rare books from around the country. Yet unlike most thieves who steal for profit, Gilkey steals for love-the love of books. Perhaps equally obsessive is Ken Sanders, the self-appointed “bibliodick” who’s driven to catch him. Following this eccentric cat-and-mouse chase with a mixture of suspense, insight and humor, Allison Hoover Bartlett plunges the reader deep into a rich world of fanatical book lust and considers what it is that makes some people stop at nothing to posses the titles they love. Amazon

Shell Games: A True Story of Cops, Con Men, and the Smuggling of America’s Strangest Wildlife

In Shell Games, journalist Craig Welch delves into our nation’s waters and wildlands in search of America’s most unusual criminals. The resulting detective story is filled with butterfly thieves, bear poachers, shark-trafficking pastors—and a rogues’ gallery of double-crossing crooks who get rich smuggling bizarre marine creatures.

Puget Sound is home to the geoduck (pronounced “gooey duck”), the world’s largest burrowing clam—a seafood delicacy worth millions on the international black market. Outlaw scuba divers pursue this prize while dodging cops, committing arson, and hiring hit men to eliminate their rivals. Detective Ed Volz has spent decades chasing fish and wildlife smugglers. Now, he and a team of federal agents are desperate to take down the most remarkable thief they’ve ever hunted: a darkly charming con man who works both sides of the law and calls himself the “Geoduck Gotti.” Amazon

The Informant: A True Story

From an award-winning New York Times investigative reporter comes an outrageous story of greed, corruption, and conspiracy—which left the FBI and Justice Department counting on the cooperation of one man . . . 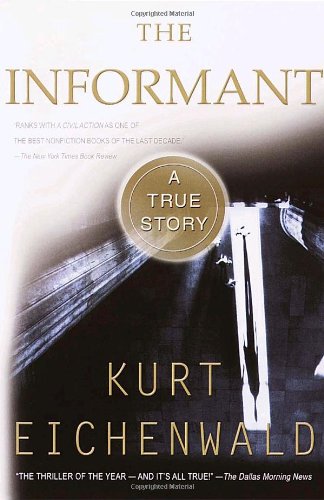 It was one of the FBI’s biggest secrets: a senior executive with America’s most politically powerful corporation, Archer Daniels Midland, had become a confidential government witness, secretly recording a vast criminal conspiracy spanning five continents. Mark Whitacre, the promising golden boy of ADM, had put his career and family at risk to wear a wire and deceive his friends and colleagues. Using Whitacre and a small team of agents to tap into the secrets at ADM, the FBI discovered the company’s scheme to steal millions of dollars from its own customers.

But as the FBI and federal prosecutors closed in on ADM, using stakeouts, wiretaps, and secret recordings of illegal meetings around the world, they suddenly found that everything was not all that it appeared. At the same time Whitacre was cooperating with the Feds while playing the role of loyal company man, he had his own agenda he kept hidden from everyone around him—his wife, his lawyer, even the FBI agents who had come to trust him with the case they had put their careers on the line for. Whitacre became sucked into his own world of James Bond antics, imperiling the criminal case and creating a web of deceit that left the FBI and prosecutors uncertain where the lies stopped and the truth began.

In this gripping account unfolds one of the most captivating and bizarre tales in the history of the FBI and corporate America. Meticulously researched and richly told by New York Times senior writer Kurt Eichenwald, The Informant re-creates the drama of the story, beginning with the secret recordings, stakeouts, and interviews with suspects and witnesses to the power struggles within ADM and its board—including the high-profile chairman Dwayne Andreas, F. Ross Johnson, and Brian Mulroney—to the big-gun Washington lawyers hired by ADM and on up through the ranks of the Justice Department to FBI Director Louis Freeh and Attorney General Janet Reno. Amazon

‘A phalanx of motorcycles cam roaring over the hill from the west …the noise was like a landslide, or a wing of bombers passing over. Even knowing the Angels I couldn’t quite handle what I was seeing.’ Huge bikes, filthy denim and an aura of barely contained violence; the Hell’s Angels could paralyse whole towns with fear, so terrible was their reputation. But how much of that reputation was myth and how much was brutal reality? Only one man could discover the truth about these latter-day barbarians; Hunter Stockton Thompson, Dr Gonzo himself, the man who saw the fear and loathing in the heart of the American dream. This counter-culture classic is the hair-raising result. Amazon

All descriptions via Amazon.